Strip clubs used to be such taboo places, particularly for men who were in relationships. They were dark hideaways where men could fulfill their secret fantasies of ogling at women. They were dingy, smoky, and even dirty and smelly holes in the wall where guys got their jollies as they watched scantily clad women strip down to their G-strings and slip dollar bills underneath them.

So, what do you do when your boyfriend is going to strip clubs?

Well, first let’s talk a little bit more about them, and then let’s follow up with some options that you have. The strip club scene has changed a lot in recent years. They are a lot more – dare we say – “sophisticated” than they used to be. While women do still strip down to G-strings, today, the dances are choreographed and synchronized to playlists that get the crowd up and moving; and that crowd is a lot more diverse than it once was. Many women are taking part in the fun too! Go to a popular strip club in a big city, like Miami, New York, Los Angeles, or Chicago, and you’ll find a mixed gender crowd. In fact, in some cases, you might even find more women than men! Strip clubs have become popular places for bachelorette parties and ladies nights out; they dance the night away, and even get up on the stage and put on their own performances alongside the paid entertainment.

While it’s certainly awesome that women have become so progressive and strip clubs have become much less taboo than they used to be, not everyone is comfortable with the whole strip club thing. They aren’t keen on the idea of watching other women strip down to their birthday suits, and they are none too pleased about their boyfriend partaking in such a “pastime” either.
If you’ve recently found out that your bae is a fan of strip clubs, you might be feeling angry, sad, and even a little bit heartbroken. We get it, your feelings are totally warranted. Just because society has become more accepting of the whole strip club idea doesn’t mean that you have to be accepting of it, too. But while you have every right to feel the way that you do, the question still remains: What do you do? Below, we’ll shed some light on how to deal with this very delicate situation so that you and your man can hopefully overcome the whole strip club thing with your relationship still intact.

We Asked 100 Women What They Think 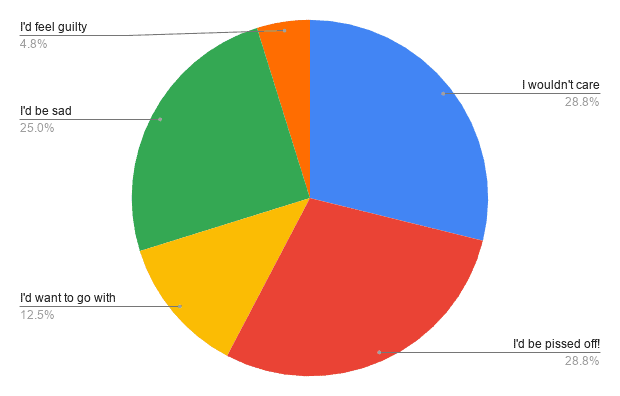 Chloe said “My ex was exactly same person. So we chose to breakup.”
Evie said “He can do what he wants. No objections.”
Bonnie said “Only you can make the choices you need for a happy life and healthy relationship”
Amy O. said “As an ex stripper, I feel it’s a bit ridiculous to get mad about your guy.”

If your man goes to the strip club and you are less-than thrilled about it, the first thing you need to do is really get an understanding of why he is going in the first place. While it’s true that some men do frequent these establishments because they are just gross perverts that want to get their rocks off by gaping at naked ladies, that’s not the case for all men; some guys really do go to strip clubs for reasons other than being obsessed with watching bare bottoms and boobs being flaunted in their faces. For many men, strip clubs are a social outing. They give them a chance to kick back, relax, and enjoy some quality bro time with their guy friends. They really couldn’t care less about the nakedness that is being paraded in front of them, and they take nothing away from the experience. In fact, if you go to a strip club, you’ll find that a lot of dudes spend more time interacting with each other than they do gawking at the ladies on the stage. These guys aren’t there to lust after women and fondle them; in other words, they aren’t go to strip clubs to cheat on their other halves. You’d be surprised to find out how many men who are in committed relationships and are head-over-heels in love with their girlfriends and have never once cheated on them – or even thought about cheating on them – go to strip clubs.

However, while the majority of guys who do go to strip clubs aren’t there to cheat, unfortunately, there are dudes that do go to these facilities with every intention of getting some loving from another woman. If your guy is the type who is obsessed with porn; whom goes to strip clubs several nights a week – and, more often than not, he goes by himself; who acts really differently after an outing (he’s aggressive, he pulls out tons of different moves in the bedroom, or is making strange requests), and who has phone numbers of girls with names like “Crystal Chandelier” tucked into his pocket or on his phone and is covered in lipstick and the overwhelming scent of perfume, then you might need to be worried. But, if he’s not acting any differently after an encounter at a strip club, then chances are that you really don’t have anything to worry about.

It’s no secret that most men only want one thing, right? Well it turns out that’s not only wrong, but may actually be the root of many failed relationships. In fact, the one thing men are universally obsessed with…Is actually a feeling he’s been chasing his whole life. It’s an elusive combination of emotion and biological drive that’s rarely satisfied in life or love.

And when you know how to satisfy this life long obsession…He will make it his life long mission to cherish and please you…And he will pursue your love to the ends of the earth.

Here’s a video you won’t want to miss that shows you how to become your man’s deepest obsession: Become His Obsession

If you’ve found out that your boyfriend is going to a strip club, it’s a wise idea to reevaluate your relationship. If he’s completely and totally committed to you and you have never had any concerns about him cheating on you, chances are that you have nothing to worry about. Believe it or not, it’s very likely that he is going to the club just for the sake of fun; he really isn’t going because he’s trying to get some loving elsewhere. But, if you aren’t secure in your relationship; if he’s cheated on you in the past and you are constantly worried about his whereabouts – even if he isn’t going to the club to cheat on you – then you might want to reconsider the situation. The crux of the problem isn’t the strip club; it’s your relationship with each other.

If you are questioning your boyfriend’s faithfulness – and you’re questioning it a lot – then it’s probably safe to say that you just shouldn’t be with him. Strip club or not; your relationship just isn’t that stable and it isn’t worth the arguments, headaches, and heartaches, is it? Sorry to be so frank, but it’s the truth! Honesty can be harsh sometimes, but it’s far better to be honest than it is to continue on with a destructive relationship.

Even if you are in a totally solid relationship and your guy is going to the strip club just to have some fun with his friends, if you still aren’t comfortable with it, talk to him! Just because he’s cool with it, and a lot of other girlfriends are cool with their boyfriends going to strip clubs, that doesn’t mean that you have to be!
If you just aren’t keen on the idea of your guy watching other women waltzing around with their tatas hanging out, be honest with him! Sit down with your guy and have a real, hear-to-heart, totally unfiltered relationship with him. Don’t try to pretend that you are OK with it, even if you aren’t. Let him know exactly how you feel.

Now, do remember that he has a right to state his feelings on the matter, too. Let him explain it from his point-of-view. Listen to him. You might be surprised to find that there really isn’t anything to worry about at all, and that the strip club really isn’t that big of a deal. However, if you still aren’t comfortable with it after you have had an open dialogue with each other and you don’t want him to go to strip clubs anymore, tell him! If he’s totally into you and really respects you, then he is going to respect your feelings and he’ll stop going. But, if he continues to go, even after you have stated your case and made it completely clear that you aren’t happy about it, you might want to reassess the situation. If you find out that he’s sneaking around behind your back and going to strip clubs despite your feelings – or if he’s just completely blatant about his whereabouts – then chance are that you’re headed down the path of trouble.

Strip clubs and guys are kind of like peanut butter and jelly; they tend to go hand-in-hand; however, that doesn’t mean that you have to be cool about it. If you’ve found out that your boyfriend is going to watch naked ladies dance and you aren’t very keen on the idea, you should definitely be open with him and share your feelings. You should also reevaluate your relationship and keep an open mind. If you are solid and he’s never given you any reason to worry about cheating and he’s truly going to strip clubs to spend some quality time with his guy friends, then it really may not be that big of a deal. Remember that a lot of strip clubs aren’t the gross hole in the wall places where perverts hang out and ogle naked women in the shelter of night anymore; they can actually be quite classy. Heck, you may even want to tag along with your guy! You might be surprised to find that the two of you could actually have a really good time together; and adding in the strip club element may even strengthen your relationship.

Photo by Eric Nopanen on Unsplash

Hey there! Thanks for visiting our site! We are a group of friends that are young professionals and have always been into the dynamics of dating and relationships. We hope that through our site we can reach out and make a difference in your dating life.

Our Most Popular Posts

This site is owned and operated by DatingDamsel. DatingDamsel is a participant in multiple affiliate programs including Amazon and ClickBank. Referring traffic is sent to these sites and others in return for compensation. Basically, when we link to other sites, sometimes we receive a commission.

Scroll back to top