Every person is different and we have to adjust and test out the waters when it comes to conversing. But sometimes, you might really, really like a guy and you just don’t know the first thing about keeping the ball rolling.

That being said. If you’re wondering,

“How do I keep a conversation going with a new guy?”

Don’t worry. Below are some tips for you to follow the next time you and your man are chewing the fat.

Be alert and keep your ears open.

The trick to having a great conversation is to be engaging. You can’t really keep up with what a person is saying if you’re not listening in the first place. He’s might find it rude if you’re making the conversation one-sided. Make sure that both of you are getting about the same amount of time in the spotlight. Pay attention to what he’s saying and don’t drop the ball. It’s only going to get awkward if you respond with something completely unrelated or you keep going off in weird tangents. Nobody appreciates that.

Go off on what he last said

One trick you can do to let him know that you’re completely engaged in the conversation is to ask relevant questions. This makes it seem like you’re truly interested in what he has to say and that you want to explore the topic even further. Everybody loves to be asked questions, particularly if it’s about themselves. No one would pass up the chance to talk about themselves if there’s a willing audience. If he’s asking you questions about yourself, then it’s only polite to reciprocate them. If you truly want to get know a person, shouldn’t you be doing this anyway? When he does answer your question, go ahead and ask follow up questions. This shows that you’re listening and what they are saying matters to you. Aside from surface questions like, “How’s that salad that you ordered?” you could also ask deeper questions like, “What are the things you’re passionate about lately?” or “What was your childhood like?”

Make a game out of it

This is something you can do when things go momentarily stale. Make it fun again by trying to steer the conversation into a game of 20 questions or Would You Rather. Not only are these kinds of games very revealing of person’s insights, preferences, and character, they also keep the overall tone of the conversation light and enjoyable.

Don’t panic if there’s a bit of silence

Now, if you’re just sitting there for an hour, listening to each other’s cutlery clinking on your plates, then one of you better do something about that. If things fall a little quiet after a hearty laugh or you’re just exchanging meaningful looks over your drinks, then everything is fine. One of the ways you can tell if you’re right for a person is if you’re comfortable sharing silence with them. Solid couples who have stood the test of time are veterans at this. They don’t need to talk to share real intimacy. While it’s hard to expect this from new couples who are only getting to know each other, you shouldn’t be afraid of little gaps and lulls in your conversation. It’s only natural and you can’t expect the both of you to keep blathering on without any pauses like in those 50s movies.

Don’t be stingy on the compliments

Don’t be afraid to dole out compliments to your man. Just like you, men like being told that they look nice, that they’re funny, smart or that they’re really good at what they do. Just remember to not overdo it because it’s a little weird if everything that comes out of your mouth is complimentary. It would seem like you’re just sucking up to him or you have some sort of weird motive. But generally, people love to be complimented. If you praise him about something specific, then it’s likely that he’ll expound on it more.

Know when the chemistry is just not there.

This is bound to happen at some point. Sometimes the conversational chemistry just isn’t there. It might be because you both have entirely different interests or you have different conversational styles. It’s not worth it to force this with a guy. Just think about it. If you do end up with this person after forcing the chemistry that wasn’t there to begin with, how happy do you think you’re going to be in the future? Sometimes, there’s nothing wrong with either of you, but you’re really just not compatible. There’s no shame in acknowledging this. At the end of the day, you’d both be saving yourself a lot of time if you agree amiably that things just aren’t working out.

At the beginning of a relationship (or any stage of the relationship, for that matter), you have to be as transparent as possible. This is to let your man know what you’re all about. If you don’t do this, then there’s a chance that what you both want in life don’t match up and you wouldn’t even know about it. Time will go on and before you know it, you find yourself ending a long relationship only to end up back in square one. Let your freak flag fly (although, it’s advisable to do this gradually). Let your true thoughts be known and bare yourself to your man. Avoid thinking things like, “Will I sound lame if I say this?” or “I don’t want to scare him away if I say this.” Be your true self and you’re guaranteed to not run out of things to say.

This is the time to show off and pull out what you know from your general knowledge and maybe some things that you’re an expert in. This is a good way to impress him. Knowing that you’re with someone who knows what they’re talking about is always a turn on. Remember, though, that you could be potentially putting yourself in the danger of seeming like a know-it-all. So again, don’t overdo it. See? It’s all just a matter of getting good at this tango. Like everything else, this takes practice and confidence.

Now that we’ve covered the tips on how to keep a conversation from going stale, let’s get into the topics you should avoid. 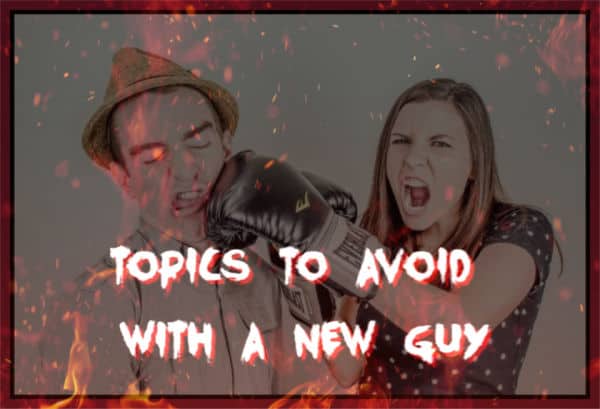 1.Telling him about your future plans.

Yes, there will come a point in the dating game where you have to be upfront about what you want out of a relationship. This is maybe when you’re 10 boyfriends in and you’re just want someone to be serious with. But even if you’re at this stage, one surefire way to chase a guy off is by being overly divulging your future plans. If it’s your second or third date, this is not the time to be telling him what you want to name your babies and whose family you’re going to spend Thanksgiving with. Keep things light and casual. There will be time for that in the future if things go well.

2.Talking about your ex.

If you find yourself filling in the lulls of your conversation with things about your ex, then stop! Treat this new relationship how it’s supposed to be treated: a fresh, clean slate. Don’t be hashing out the past and revealing details about your ex that you’re current man has nothing to do with. This is boring and red flags will be raised in his mind. Talking about an ex makes you seem like you have a lot of hang-ups and you come with a lot of emotional baggage.

Sure, today’s political climate has made an expert out of you and just about everyone is dying to put their two cents in. But this is not really an attractive topic to be talking about. Save your qualms about the government for people really know you. Conversations about politics can get pretty heated, especially if you’re both just competing to get the upper hand. Suddenly, you find yourself in a full blown debate at the bar. Not cute.

4.Bring up money early in the relationship.

Talking about money in the beginning of a relationship is just uncomfortable and downright rude sometimes. Even if you are interested, don’t ask him about how much money he makes. This is basically like asking him how big his penis is. A classy lady has no business asking tasteless questions like this. Similarly, don’t tell him about your financial woes. This is the kind of conversation that you should be having once you’re truly in each other’s lives and you’re already living together or something. If a guy is weirdly obsessed about how much you make, then that’s a red flag too. That just goes to show that something like that matters to him. Either he wants to freeload off you or he wants to make sure that you’re not making as much as he is so he can assert his dominance. Either way, it’s a bad idea to keep talking to a guy who has issues like that.

Hey there! Thanks for visiting our site! We are a group of friends that are young professionals and have always been into the dynamics of dating and relationships. We hope that through our site we can reach out and make a difference in your dating life.

Our Most Popular Posts

This site is owned and operated by DatingDamsel. DatingDamsel is a participant in multiple affiliate programs including Amazon and ClickBank. Referring traffic is sent to these sites and others in return for compensation. Basically, when we link to other sites, sometimes we receive a commission.

Scroll back to top